For the last three years, Tahaddi Education Center has been incorporating Living Values Education into our weekly schedule from KG2 to level 5. So far this year the children have studied peace, cooperation, and now unity! Through group games and activities, each class discusses and explores life’s essential values. 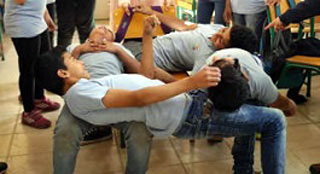 Jenny Gebara, the Co-Focal Point for LVE in Lebanon, sent in an update for the academic year, 2016-2017. She noted, “A follow-up meeting was held with the principal of the Saint Coeur School in the south of Lebanon. She informed me that after the pilot project with LVE last year, they have now officially adopted LVEP and appointed a coordinator for the coming academic year. Monthly meeting with the teachers will be held and three assemblies are scheduled for the coming year for students 5 to 18 years of age. Next week, I will be meeting with the principal of a college in the same area to introduce him to the program and the training. It is worth mentioning that both schools are close to the border (7 kms away) with Palestine and have suffered a great deal because of war and violence for a very long time.”

Congratulations and appreciation to Jenny, and all good wishes to the educators and students of both schools.

In September, two LVE workshops were held in Lebanon, led by Jenny Gabara. The first workshop took place at the Tahaddi Education Center (TEC) in Beirut on the 7th and 8th. TEC is a Lebanese NGO that provides educational opportunities for at-risk children in a very poor area of Beirut. The educators there have been implementing LVE for the last two years with five through eleven-year olds with wonderful results. The second workshop took place on the 11th and 18th at Saint Coeur School in Marjeyoun, in the south of Lebanon. Twenty-five educators attended the two-day training. They will implement LVE in grades 1 through 9, for students 6 to 14 years of age. 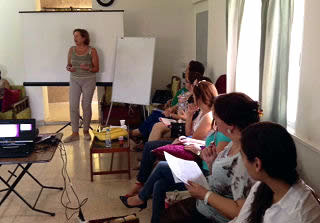 Feedback from Teachers – It's an opportunity to live in a peaceful and happy world where they dream to be.

Living Values Education was introduced in Lebanon in 1999 at the UNESCO Conference on the “International Decade for a Culture of Peace and Non-violence for the Children of the World”. Among the attendance was Rula Kahil, a former teacher at the American Community School at Beirut. In the summer of the same year, Rula attended LVE “Train the Trainer” (TTT) in Oxford shire resulting in coordinating LVE in Lebanon afterwards. For about a decade and with the help of interested educators, many of whom attended LVE TTT, LVE’s philosophy, activities, skills, and teachers’ training expanded. Many schools and organization in Lebanon’s capital, Beirut, and the North adopted and used many of the modules and skills needed for values based education. This is a list of some of the schools and organizations that got involved in the program; The American Community School at Beirut, International College at Beirut, Some of the Palestinian Camps’ schools in Beirut, Brumana High school, Beirut Modern School, Saint Coeur schools in Beirut and the North, and some government schools in the northern part of Lebanon.  In addition to the educational institutions and through a local TV program called “Aailaty,” my family, LVE stretched to the larger Lebanese community. Once a week, a short segment was allocated for sharing an LVE skill and/or value with viewers and participating parents. Some of the shared skills were on active listening, conflict resolution, and suggestions on values-based parenting and communication.

LVE’s work in Lebanon continues to expand through the work of Jenny Gebara, an LVE trainer. Jenny attended the LVE TTT training in Oxford shire in July 2001, and introduced and supervised the LVE program at Brummana High School for three years. In the past couple of years, she introduced LVE to “Tahaddi”, a Lebanese NGO and education center (TEC) located in Beirut.  The center provides educational opportunities for at-risk children in a very poor area in Beirut. In July 2013, Jenny held a two days teachers’ training for the center’s 25 educators. The implementation of LVE started in September 2013 for students five through twelve years old.

Since its inception at the TEC, LVE has made a difference in the lives of children there. Teachers continuously report changes they witness in their students. LVEP lessons provide students with a safe space where they get the chance to express their feelings, fears, and hopes. They assert that LVE implementation provides their students a values-based environment where they feel valued, loved, and respected. Lessons and discussions are taught in the Arabic language with sensitivity and consideration of the students’ cultural background. In the past two years, the following values were covered: peace, love, respect, responsibility, and happiness. A new age group, youth group, has been introduced to LVE this year, and accordingly, Jenny will be holding a new training for new teachers in September 2015.

Some feedback from the teachers:

The students enjoyed every session of LVE. They needed someone to listen to them.
Ms Dalia, Grade 3 teacher

I was impressed by the students’ feedback and their own understanding of happiness, and the feelings they get when they feel loved.
Ms Nour, Kg 3 teacher

Living values has given the children a space and time to express their feelings freely, and to feel loved and valued.
Ms Noura, Kg 2 teacher

Students wait eagerly for the Living Values session and they respond in a passionate way! They love to draw, sing, dance and express their feelings.
Ms Najwa, Grade 1 teacher

Our children adore the Living Values sessions. They always ask about when are we going to talk about peace and happiness. It’s a free and safe time for them to express what they feel deep inside and escape the tough reality they have to face every day. It’s an opportunity to live in a peaceful and happy world where they dream to be.
Ms Saria, Grace 3 teacher

During the assembly held at the end of every value, students present a song, dance or art work they have done! They are so proud of their work and so hopeful of a better future.

By Rula Kahil and Jenny Gebara