During the values awareness sessions participants needed more clarification about the difference between the values that are at the heart of every human being and the range of other values that also exist.

The opportunities that participants shared in small groups was very important; this was one area on the evaluation forms that was highlighted. During the circle of peace activity, participants shared experiences of a time when they felt happy. The majority expressed that when they had helped someone at a time of need they had felt a sense of happiness and peace. Virtues of determination, commitment and love were demonstrated through the experiences shared. 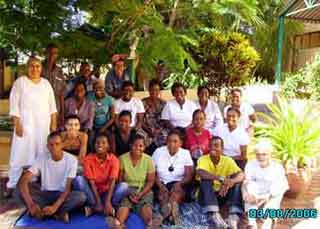 Having a chance to identify and write the qualities that they saw in each other created a wave of happiness. At one point they decided to do this activity moving around the table. The only way to describe the scene was as a train of values as each one at the same time wrote a virtue on the back of the other.

In the last session of the day, rekindling the dream, participants had the opportunity to visualize their ideal school. The atmosphere described was one that was harmonious, colourful, open and peaceful. They described the educators as being happy, patient, loving, open and caring and the students as being happy, independent learners. 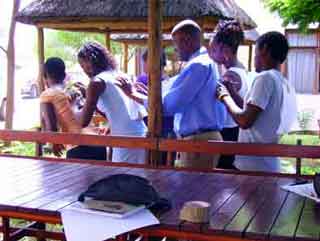 On the second day the Living Values Theoretical Model was presented outlining the core values needed to create a values based atmosphere. Each group took one of these values and mind mapped what was needed to make a child feel safe, secure, loved, valued and respected. During the practical lessons participants had an opportunity to experience some of the activities. Here are some descriptions of the stars that the participants designed.

A participant shared at the end of day 2 that there was so much benefit in having moments of reflection as it gave her a chance to rediscover the values within. She said that although we know it is important we often we do not make time for this.

Dipty Naran, the coordinator for the Living Values Program in South Africa, shared the benefit of using puppets as a means through which children can express their ideas and feelings. She also shared that we may feel that children may not appear to be responding to the program particularly when they do not take an active role but prefer to observe. She gave a practical example of a child who did not participate for 2 weeks. However on the last day she received a letter thanking her for the activities and that he had taken a lot of benefit. This experience highlighted that everyone can be touched through values. 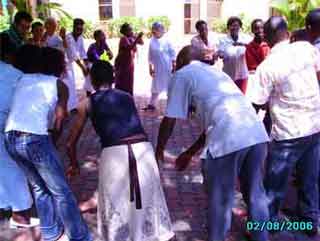 The day started with a reflection. This was followed by an activity where they had to identify the values in a picture that their partner had drawn. The feedback from this activity was that it gave them a chance to use the value of appreciation. They also realized that through art so many values are expressed as we are not limited by words. They also felt that the values could also help in their work environments. This activity provided a good introduction to the session "Building Positive Behaviours."

Rodrigo explained the need to recognise positive behaviors in children as that becomes a building block to enable children to keep performing good actions. One of the main things that came out of this session was an understanding of what changes behaviour – a positive attitude and values. One participant said that it is not the discipline that will change behaviour but love. The same sentiment was echoed throughout day three particularly as the participants had an opportunity to experience the lessons used for street children. They expressed that the solution to the variety of problems that street children face is to fulfill their lack of love. This discussion was concluded with a very powerful statement by one of the participants: With love nothing is impossible.

One of the concerns that participants had was the use of drugs among street children and children at risk. The question that was asked was, "If you discover a child in group who is using drugs what are the steps we can take without talking about drugs directly."

Dipty shared that you need a balance of practical things as well as a high vision for the child. There may be a need to liaise with other groups such as drug rehabilitation as well as using the values programme.

Skills to create a values-based atmosphere were shared and practiced during Day Four. The information about active listening and conflict resolution proved to be one of the most important practical areas for the participants. There was a concern that there may be times when we need to give advice or provide a solution. What was emphasized was that the act of listening gives the speaker space to realize what he or she needs to do.

Active Listening: If you want to see the greatest actors it was seen during this introductory activity. Each one was given a role to listen or to speak and the listeners were given a direction to interrupt or laugh, or not to let their partner finish the story.

Practical lessons dealing with the death of a loved one helped some of the participants to deal with their own loses as they went through the exercise. One of the participants shared that she had a deep sense of sadness inside of her due to the loss of her father. She said that she was able to liberate herself from this sorrow through this activity and was left with a deep sense of peace.

The conflict resolution session helped participants to realize their role as mediators – to help the disputants find a solution and not to try and give solutions.

On this day Rodrigo presented Howard Gardner's Multiple Intelligences which highlighted that students have strengths in different areas. Some of the participants noted the need for a variety of activities to ensure that children had an opportunity to experience success. He also introduced the parent program and presented the model for establishing regular parent groups to help them develop a values based atmosphere in the home.

An opportunity to think about different ways of implementing the programme in their various settings resulted in a discussion. Different possibilities:

The last session of the day gave participants a chance to role play some of the stories used in the Living Values Activities for Street Children books. Once again they enjoyed this part of the training and proved to be very good actors. But more importantly they could appreciate the powerful messages that could be transmitted through drama.

Some of the comments that were written in the Evaluation forms were as follows:

The follow up to this program will take place next month where the participants will have a chance to meet once again to share their ideas. Meetings and further presentations will also be arranged.